We caught up with Hegele to find out a little more about his winning project and how he envisions Wordsmith’s NLG being used in the BI experience. 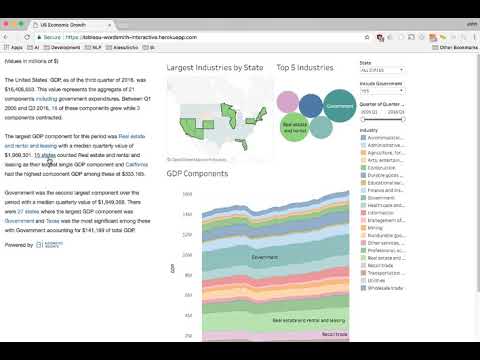 How did you approach this hackathon? Why did you go about it at this angle?

At Automated Insights, our Wordsmith platform is the only tool that allows Tableau users and partners to add narrative to their dashboards that is highly contextual and contains the same tone, relevance, and domain expertise that they would expect of a human analyst. In effect, Wordsmith allows these Tableau users to tell their own unique story about their data and to tell it in a fully automated way with no compromises.

I started to wonder how I could enhance that narrative and whether there was a way to link the narrative and the dashboard in a more explicit manner. Since Wordsmith gives me the option to completely control the narrative content and how it’s produced, I started experimenting with dynamically building links from Wordsmith narrative back to the dashboard itself and here we are. The GDP dashboard that I used here has been around for a while. It’s simple enough that it makes a good proving ground for new ideas. It has the side effect of being a dashboard that visualizes the least interesting topic I can think of so, when people get excited about it, it’s a good indication that I’m moving in the right direction.

What was your experience working with Wordsmith’s API and Tableau’s JS API?

The Wordsmith API is incredibly simple to use. As the head of our Integrations Team, I use a lot of APIs and I still believe that Wordsmith’s API is among the easiest to use. There is a single endpoint responsible for generating content and content is generated in milliseconds so it’s easy to create a true real-time experience.

Tableau has a more complex API, but it’s so powerful. The ability for users to completely customize their visualizations and dashboards is among the things that makes Tableau so powerful, but I imagine it also creates a huge challenge when you think about exposing functionality via an API. That said, Tableau has done a great job of juggling that high degree of customization with providing really useful and interesting functionality in their API.

Do you think your project could be implemented and useful for companies in the real world?

Absolutely! In fact, we’ve already talked to several companies and partners about how to use Wordsmith to create this type of functionality. As BI tools like Tableau have become a critical component of companies’ analytics workflows, it has become more important to present data in a way that is consumable across an organization. Wordsmith is able to replicate exactly what a human analyst would write about a dashboard and do so in fractions of a second. It helps remove the burden of manual and/or repetitive interpretation from data science and analytics teams and helps non-analytical professionals consume highly technical information faster, with less effort, and it removes the potential for human error. It takes a tool like Tableau out of the realm of data professionals and makes it a centerpiece of decision making across an entire company.

In a broader sense, we live in an increasingly data-driven world and I think it’s important to not only accept, but embrace that not everyone in a company is a data expert. The fact that employees come from a diverse range of backgrounds and have widely varying opinions is among the most valuable assets that a company can leverage. We are making more data-driven decisions than ever before and excluding those less-technical employees is a detriment to both the company and the employee. Narrative can help bridge that gap, but the ability to “point to” or “call out” elements of the dashboard from within the narrative helps not just bridge the gap, but also creates an opportunity to help everyone understand the data itself in a more meaningful way. That’s something that can only be automated with Wordsmith.

In what ways is the Wordsmith + Tableau integration unique?

What makes Automated Insights and our Wordsmith platform unique in the NLG space is our focus on providing highly contextual narrative at the dashboard level. Rather than focusing on an individual chart or element of a dashboard, we want to provide a singular narrative or set of bullets that analyzes a dashboard in its entirety. Narrative from Wordsmith should be indistinguishable from what a company’s most skilled analyst would write about the dashboard if she/he were to sit down and manually build a report.

A human analyst wouldn’t write five separate reports for a dashboard containing five charts and it’s entirely reasonable to expect the same of an NLG solution. We also want to focus on going beyond simplistic and rudimentary concepts like minimum, maximum, average, etc. When a data expert gets asked questions about a dashboard, those questions are never “What is the average of this chart?” or “What is the minimum value here?” Wordsmith provides the freedom and functionality to move beyond rudimentary description and, in many instances, we are providing actionable content that not only helps users understand the data but also helps them understand what to do about it.

A good rule of thumb, when it comes to BI, is: if a human can write it, your NLG solution should be able to write it as well. After all, this is Natural Language Generation so it should read just like a person wrote it. If an NLG solution requires multiple disconnected narratives, uses poorly constructed language, or simply regurgitates remedial characteristics about a single chart, it’s hard to say that it rises to the level of “natural.”

Is there anything you’d expand upon with this project, given more time?

Well, I’d probably compose a little better visualization. Had I known I would win, I would have focused more on the aesthetics. We have some talented designers here at Automated Insights. Sadly, I’m not one of them.

The one thing that sticks out to me is that the narrative here is fairly static. Generally, I like my narrative to have more variability and that’s really easy to do with Wordsmith, but because this was a first exploration I didn’t spend much time worrying about variability.

From a functionality perspective I think there quite a few interesting things that could be added here. I’ve been working on some enhanced versions of this that I’ll be bringing to Tableau Conference 2017. Drop by our booth and I’d be happy to show off some new and interesting takes on this.

So on our count, that’s now 2 Tableau Hackathons you’ve been a part of and won. 2 for 2. We don’t need NLG to tell us that’s a good statistic. Will you be back for a third?

I’m planning to be at the Hackathon at Tableau Conference this year though I think I’m limited to participating in a showcase rather than competing for the grand prize. At last year’s Tableau Conference we won an incredible hot dog trophy which is proudly displayed at the front of our office. It’ll be hard to resist the temptation to don a disguise and compete incognito if there’s another amazing trophy on the line.

While I won’t be in the running to win the TC17 Hackathon, I will absolutely encourage anyone who is interested to enter. It was a blast to compete last year in Austin and the Tableau team does an awesome job of hosting the event. If you do decide to participate, feel free to stop by and chat about NLG, Tableau, or almost anything, really.